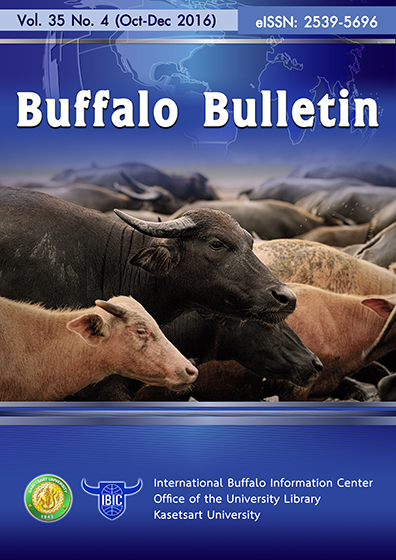 This study reports the present status of clinical and subclinical of Trypanosoma evansi infection in buffaloes of Mumbai region of India. Seventy five out of 253 buffaloes screened by different methods (Blood Smear Examination and PCR) revealed T. evansi with the overall prevalence rate of 29.64% which is alarmingly high as compared to previous studies conducted in the region in the recent past. The prevalence of Trypanosoma evansi was found to be highest at Karjat (67.06%) followed by Wawarley (51.72%) and it was lowest at Govandi (14.28%). The level of parasitaemia was mild in 82.2%, moderate in 11.29 and high in 6.45% amongst the infected buffaloes. Out of 75 positive animals only 10 (13.33%) buffaloes were exhibiting one or the other typical clinical signs suggestive of trypanosomosis. The parasitaemia did not coincide precisely with pyrexia as three of the 10 confirmed clinical and 65 subclinical cases did not reveal pyrexia. These findings confirm the status of buffaloes as a reservoir host for T. evansi and increased chances of buffalo population at risk of its infection in the region.