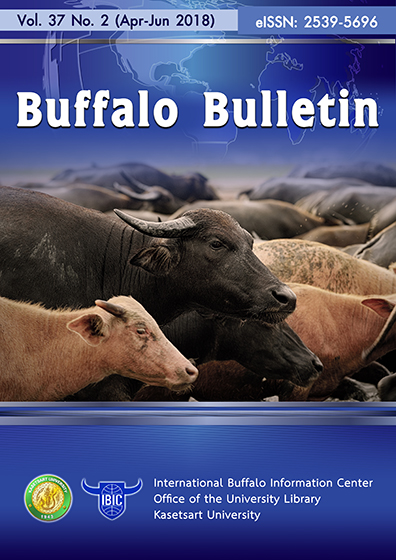 The aim of this study was to evaluate the apparent digestibility, excretion of purine derivatives (PD) as well as the rumen protozoa population (density and genus composition) in buffaloes on two comparative diets containing raw or roast soybean in concentrate. Four buffaloes with fistula in the rumen were fed with roughage grass hay (70%) and concentrate (30%) consisting ground grain corn and ground grain raw soybean (RAS treatment) or roasted soybean (RSB Treatment). Total collection of feces and urine were performed to estimate the apparent digestibility of dry matter, crude protein and neutral detergent fiber; urinary excretion of purine derivatives (PD), and rumen contents sampling to identification and counting of ciliate protozoa population. The apparent digestibility of the crude protein was higher in the animals receiving diets with roasted soybean (63.45%) than with raw soybean (47.16%). But, no significant differences were observed in the DM and NDF digestibility. Purine derivatives excretion did not differ between treatments, maintaining relative proportion of allantoin:uric acid of 89:11%. The average synthesis of microbial nitrogen was estimated in 33.88 g/d. We have concluded that substitution of the raw by roasted soybean in the diet for buffalo has promoted increase in the apparent digestibility of crude protein, and reduction of total number and Entodinium protozoa population in the rumen, but had no influence in the composition of the fauna, excretion of PD, and microbial protein synthesis.