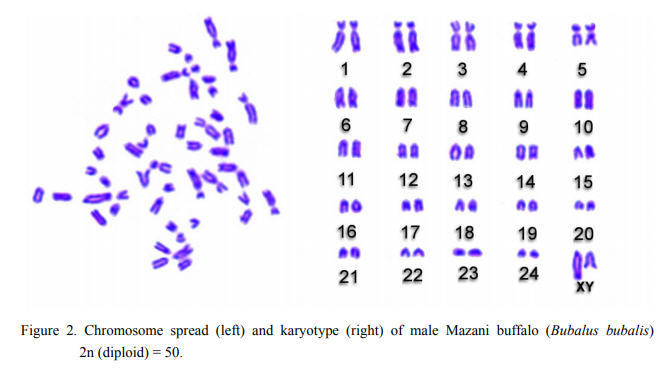 Zoologists have introduced buffalo as “future livestock” and claim that their potentials and benefits will be more than any other livestock. River buffaloes play an impressive and crucial role in the economy of rural families. The ability of these animals to produce milk, meat and also their draft power has caused to be kept in rural areas. Mazani buffalo is classified as a river buffalo and no further karyotyping specification was made up to now. Blood samples were taken from ten (5 males and 5 females) Mazani buffaloes from Mazendaran province located in north of Iran. Blood lymphocytes cultured at 37o C for 72 h in presence of colsemid and the metaphase spreads were performed on microscopic slide. Giemsa was applied to stain chromosomes. The current study shows that 2n=50 and fundamental numbers (NF) is 60 in male and female. The types of autosome were 10 submetacentric/metacentric and 38 telocentric. The X chromosome is the largest telocentric and the Y chromosome is one of the smallest telocentric chromosomes. Also, the relative length of chromosomes ranged between 7.2 and 2.17 in Mazani buffalo. All chromosomes were found normal. The karyotype formula of Mazani buffalo is as follow: 2n (50) = 4M+6SM + 38 T+Sex chromosome.