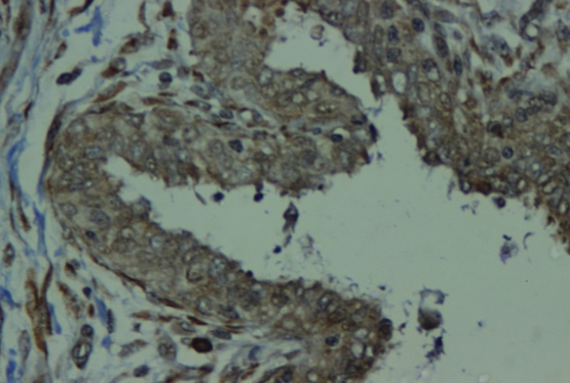 There are no reports of mammary gland tumors in buffalo bulls. The current communication describes an unusual occurrence of papillary cystic adenocarcinoma in a developed right fore quarter of udder in a three years old buffalo bull. The bull was presented with a well developed scrotum, descended testes and enlarged right fore quarter of udder. Histopathology of the excisional biopsy revealed papillary cystic adenocarcinoma. Immunohistochemistry for estrogen receptor alpha and progesterone receptor revealed moderate and mild positivity respectively in the glandular epithelium. In general, mammary gland does not develop in bulls except in rare cases of gynecomastia. In the present case, a quarter of the udder has developed and undergone neoplasia probably under the influence of estrogen and progesterone hormones.