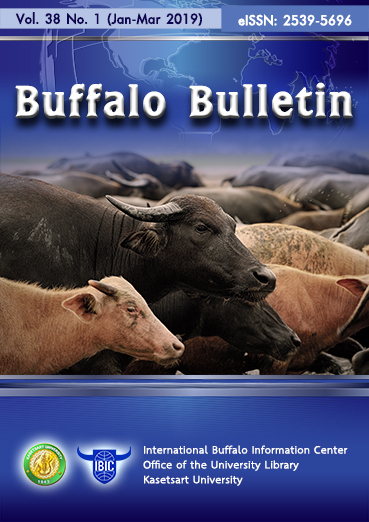 An attempt was made to know the management system of intensive buffalo farming and buffalo derived -problems under semi-arid area of Bangladesh. Direct interview with farmers, farm observation, community discussion and key informant interview (KII) had been followed over six months in Dinajpur district. It was observed that buffaloes were reared under two types of management system namely household yard intensive (HYI) and completely intensive (CI). In HYI system, farmers purchased heifer or pregnant buffalo from local market and sold mother with calf after one year. Buffaloes were kept shed at night and maintained feeding, showering and other activities in the household yard at day. Those were showered by once-two times/week in cool day, but most of them were showered in a day. On the other hand, in CI system, buffaloes were reared inside the shed all time and maintain feeding, showering and other activities in the shed. Buffaloes were showered twice in a day in winter period while three times in summer period. Average milk production for each buffalo was 5 to 8 liter/day. Major productive and reproductive traits e.g. lactation Length (day), average milk yield (L/day), dry period (day), age at first pregnancy (month) and age at first calving (month) were found better in CI system than that of HYI system and those were found highly significant (P<0.001). Significant difference were found on total solids, fat and protein content but no significance difference were observed on SNF, lactose and ash of buffalo milk between two farms. Insignificant difference (P>0.05) was found for the value of electric conductivity (ECms/cm) that showed both farms produced healthy milk (3.25±0.49 vs 3.09±0.89). Both systems showed as a profitable venture (BCR 1.33 vs 1.25). Problem matrix revealed that the top ranked order of problem were “inadequate knowledge on buffalo rearing”, “high price of feed” and “low milk price” mentioned as 1, 2 and 3. Shortage of feeds and fodder, high temperature and lack of cow boy were ranked as 4, 5 and 6. Limited breeder bull, lake of AI workers and inadequate quality semen and credit facilities mentioned as 7 ranked problem. It was concluded that ensuring training and marketing could help to improve intensive system of dairy buffalo that meet up the growing demand of milk in urban people. Simultaneously AI facilities with quality semen, HYV fodder cultivation and credit facilities should be promoted for sustainable dairy buffalo farming.