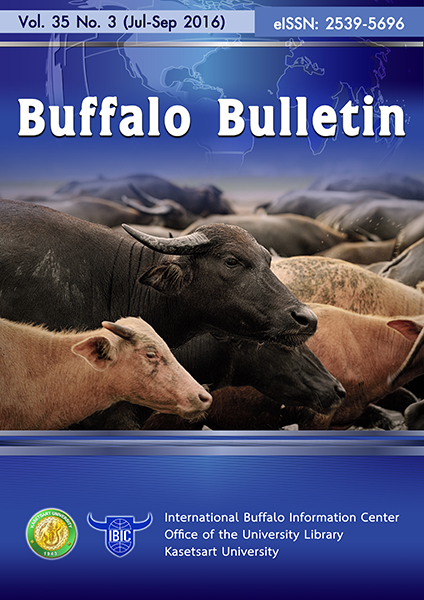 Dairying farming can be cost effective when the animals rearing were directly influenced by the productive and reproductive parameters of buffalo. Productive and reproductive performances of dairy animals should be determined on the basis of average daily milk yield, lactation length, lactation milk yield, peak yield, dry period, service period, conception rate, pregnancy rate, calving interval etc. These parameters should be maintained by the farmers so that the productivity could be increased of their herd. Hence, the study was conducted to measure the productive and reproductive performances of buffalo and dairy animal and Farmers’ knowledge on these aspect in Faizabad district of Uttar Pradesh. For this purpose 150 farmers engaged in dairying were interviewed. The farmer was selected on the basis of at least completion of one lactation length of buffalo at the time of investigation and each farmer must be rearing a buffalo in combination with crossbred cow and indigenous cow at the time of investigation. The overall Average daily milk yield (ADMY) and Lactation length (LL) was estimated to be 5.75±0.65 litre/day/animal and 276±14 days/ animal. The average peak yield of buffalo in the field condition was estimated to be 8.56±0.85 litre /animals while Age at first calving (AFC) was 1288±122 days/ animals respectively. The study reveals that the 41.00 percent of respondent were having high level of knowledge about productive and reproductive practices. Whilst about 30.00 percent of respondent were having medium level of knowledge. Knowledge index on productive and reproductive parameters of dairy animal was calculated and observed that respondent were possessing 73.47 and 70.21 percent knowledge in study area. Though the respondent are facing serious constraint in rearing, they were frequently updating their knowledge on productive and reproductive practices as compared to Buffalo and indigenous cow based dairy farmers.