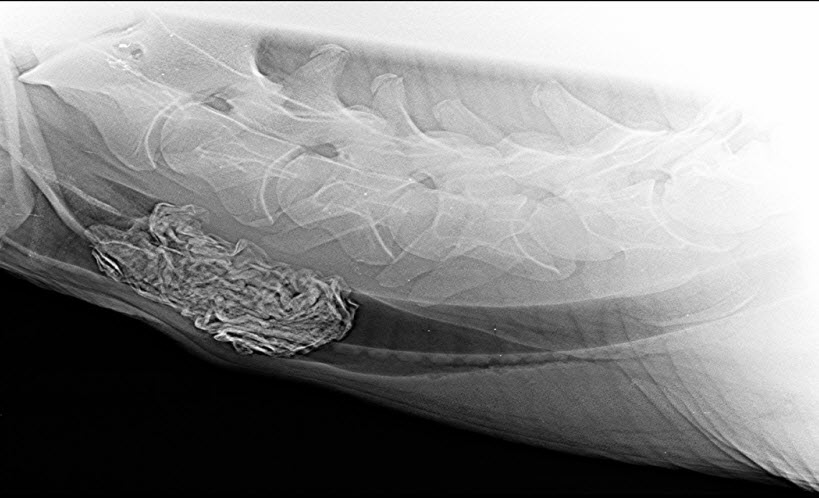 A seven years old, ten months pregnant she-buffalo weighing 401 kg was presented to TVCC, COVAS, Udgir with a history of dysphagia, repeated regurgitation and swelling at ventral cervical region since the day before the animal was admitted to the clinic. The animal was suspected for oesophageal obstruction. Endoscopy done by naso-gastric route and X Ray showed oesophageal obstruction with a foreign body situated 100 cm distal from the nasal opening. The animal was cast in right lateral recumbency. The site of incision was shaved, cleaned and scrubbed using liq. 5% providine iodine and surgical spirit. The animal was sedated using Xylazine*. Linear infiltration was done using 2% lignocaine hydrochloride. A linear incision was taken at the surgical site. The overlying muscles were dissected and the esophagus was exposed. An oesophageal incision of sufficient length was taken and an impacted leather mass was removed. The oesophageal mucosa was closed with simple interrupted suture. Submucosa and muscularis part of esophagus were closed with simple continues manner. The muscles and skin were sutured with simple interrupted sutures. The animal was maintained only on fluid therapy for first 3 days. The day after surgery, the animal was seen lying prostrate with lateral deviation of neck and showing slight vaginal prolapse. The blood sample was analyzed for serum Ca level which revealed a level of 3.9 mg% indicating severe hypocalcaemia. Calcium therapy was initiated. The animal assumed a standing posture. A day later, the animal delivered a normal female fetus. Three days later serum Ca level was re-estimated to be 8.5 mg%. The animal resumed normal feeding and rumination after which the animal was given discharge. Sutures were removed after 15 days post operatively. Female buffalo calf and mother buffalo are healthy.