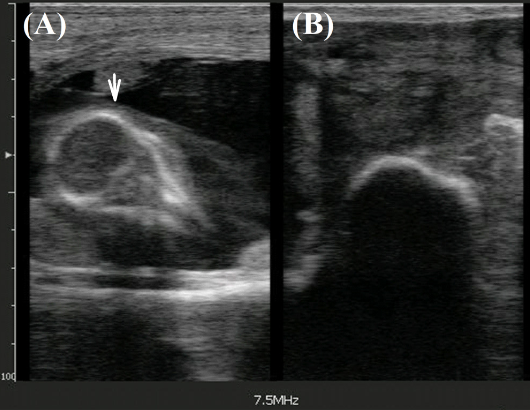 The accuracy of pregnancy diagnosis is important for increasing reproductive efficiency and decreasing interbreeding intervals of swamp buffaloes. Hence, the aim of this study was to investigate the early pregnancy diagnosis in swamp buffaloes by the vaginal cytology. Thirty female buffaloes at 4 to 7 years of age were selected and administered Ovsynch (GnRH + PGF2α + GnRH) and modified Ovsynch (GnRH + PGF2α protocols. The vaginal swab was collected from each buffalo after 19 to 21 days of artificial insemination (AI), stained with Wright Giemsa, and observed under microscopy. The results showed that superficial epithelial cells were more dominant when rebreeding (non-pregnant) on 20 to 21 days after AI. In contrast, a vaginal smear during pregnancy was characterized by few superficial epithelial cells while the parabasal cells and leukocytes were more dominant in pregnant buffaloes on 19 to 21 days after AI. The results showed that eighteen buffaloes were pregnant, and twelve buffaloes were not pregnant using vaginal smear technique. The accuracy of vaginal smear technique was 85.71%. Moreover, pregnancy diagnosis was confirmed using ultrasonography and rectal palpation on 90 days after AI. The results showed that twenty one buffaloes were pregnant, and nine buffaloes were not pregnant. Therefore, the vaginal cytology technique might be an alternative method to determine pregnancy and reduce estrus detection problems in swamp buffaloes.