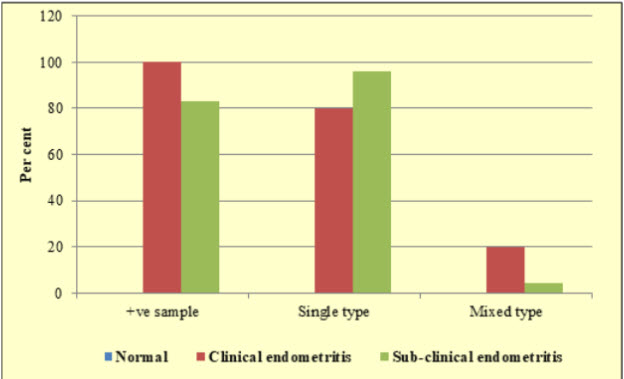 The present study was conducted to study antibiogram of bacteria isolated from normal, sub-clinical and clinical endometritic postpartum Murrah buffaloes. A total of 250 postpartum (28 to 45 days) apparently healthy buffaloes with normal calving history and free from peripartum disorders were screened. After recording history all the animals were subjected to gynaeco-clinical examination, transrectal ultrasonography and endometrial cytology by cytobrush technique. On the basis of above tests performed, total 42 animals were selected and were divided into three groups: Normal (n=06), Clinical endometritis (n=06) and Sub-clinical endometritis (n=30). Uterine lavage was collected aseptically from all the animals and microbial assay like total viable bacteria count, culture and isolation and antibiotic sensitivity tests were performed. Total viable bacterial count in clinical and sub-clinical endometritic buffaloes were 0.425±0.13 and 0.185±0.47 x 106 CFU/ml, while, uterine lavage samples from normal buffaloes were sterile. Bacterial isolates were obtained from 73.80% (31/42), out of these 93.54% (29/31) and 6.54% (2/31) were single and mixed bacterial isolates, respectively. Among the bacteria isolated in the study Escherichia. coli (30.03%) was highly prevalent followed by Staphylococcus spp. (27.27%), Acenatobacter spp. (9.09%), Pseudomonas spp. (9.09%) and others (24.52%). The antibiotic sensitivity of the isolates was found to be maximum for ceftriaxone + salbactum (93.54%) followed by levofloxacin (87.08%), ceftriaxone (80.64%), ciprofloxacin (74.19%), enrofloxacin (58.06%) and gentamycin (54.83%), respectively. It was concluded that E.coli was highly prevalent bacteria isolated from uterine lavage and a combination of ceftriaxone + salbactum was found to be highly sensitive.