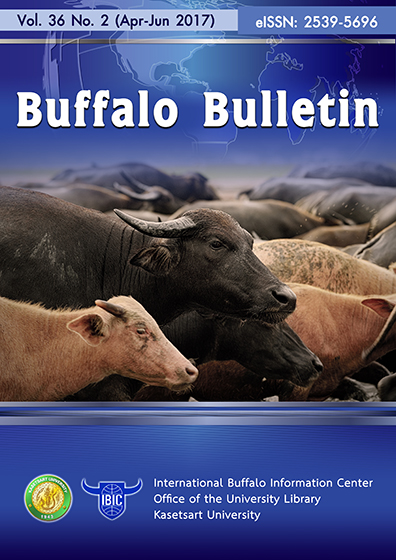 A study was designed to study follicular growth, time of ovulation and conception rate after synchronization with medroxy progesterone acetate sponges in Nili Ravi buffalo heifers. A total of (n=18) nulliparous heifers were selected and divided into two groups on the basis of ultrasonography. Group A (n=9) contained no palpable or visible structure of follicle or Carpus luteum larger than 4 mm, while group B (n=9) contained palpable or visible structure of follicle or Carpus luteum larger than 4 mm on ultrasound screen. The medroxy progesterone acetate impregnated sponge containing 250 mg of progestin was implanted in fornix vagina to each experimental heifer, and day of implantation was declared as D 1. The medroxy progesterone acetate impregnated sponges were implanted up to 6 days. On day 7, sponges were removed with the single injection of pgf2α (+ cloprostenol, 0.075 mg) and GnRH Analog injection (Lecirelin, 50 mcg) was used on day 9 to every experimental animals. Both ovaries were scanned with (Honda 7400, Japan. 7.5 MHz) on D 1, D 6, and D 7 to 9 until ovulation. Ovulation started earlier (23% ovulation at 24 h) and finished later (23% at 36 h) in cyclic heifers as compared to acyclic heifers in which ovulation started 33% at 24 h and finished earlier 56% at 30 h post GnRH Analog injection (Lecirelin, 50 mcg). Estrus response was more pronounced (P LT 0.05) in acyclic heifers as compared to cyclic. Ovulation rate was 100% in cyclic heifers and 89% in acyclic heifers. Conception rate was significantly higher (P < 0.05) in acyclic heifers (56%) as compared to cyclic heifers (30%). It was concluded from this study that conception rate was higher in cyclic group while ovulation rate was greater in acyclic buffalo heifers’ meanwhile, time and size of ovulatory graffian follicle is similar among cyclic and acyclic buffalo heifers in a same synchronization protocol.