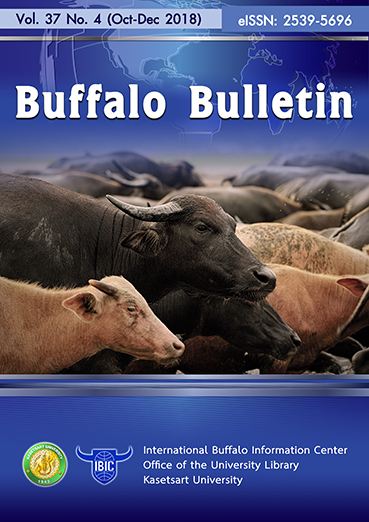 To evaluate the lactation curve of Khuzestani buffaloes in the south west of Iran and to determine its describing function, 89140 test day records of buffaloes, collected in 1991 to 2015, were used. In order to draw the real and predicted curves by Wood, Wilmink, Parabolic, Mixed Logarithmic and Inverse Polynomial models, the average of test-day records in 10 lactations and 4 seasons, with 14 days intervals, were used. All the functions were fitted using NLIN procedure of SAS 9.1 software. The results showed that, based on real data, the lactation curve of Khuzestani buffaloes became more typical from 4th and 6th lactation, as it was completed with three steps of increasing production, peak yield and decreasing phase after peak time in the 7th and 8th parities. Based on the criteria, studied functions did not have the same performance for lactation curve so that the Wood function was the best model. According to Wood function, peak of milk production increased from the first lactation and its maximum value was obtained for the 8th lactation. The time of peak yield for the studied curves were highly variable (between 79 and 90 days). In terms of estimated amount for persistency, there was not much difference among curves of different lactation, so that obtained values were very close together. In fact, we can say that lactation curves of studied buffaloes were flat, as the difference between the beginning and the end of production was very low. The results also showed that among different seasons, parabolic function had the best fitting for calving in the seasons of spring, autumn and winter and Mixed Logarithmic function was the best for calving season of summer.