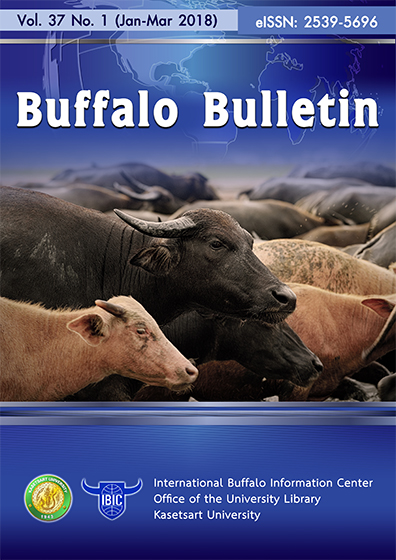 Asia harbours more than 90% of world buffalo population, out of which India ranks first. The riverine buffalo (Bubalus bubalis) mainly found in the Indian subcontinent is primarily used for milk production and more than 57% of total milk production of country is contributed by buffalo. Therefore, this study was conducted for developing a sustainable feeding module for lactating buffaloes with available feed resources. A field survey was conducted in urban and peri-urban areas of Karnal, Kurukshetra and Yamunanagar districts of Haryana province of India to study the existing feeding practices for lactating buffaloes. Most of the buffaloes were observed deficient in both energy and protein. Therefore, a number of total mixed feed formulations were evaluated in vitro to screen the suitable formulation for practical ration preparation under field condition. A feeding trial was conducted for a period of 75 days on ten lactating Murrah buffaloes (BW, 502±12 kg; MY, 6.0±0.2 kg; Parity 2 to 4), divided into two groups of 5 each in a completely randomised block design with the most appropriate combination of complete feed mixture in comparison to conventional green fodder based feeding system. Although feed intake was lower, there was a trend in increase in nutrient digestibility with significant (P<0.05) increase in protein digestibility in buffaloes fed complete feed mixture. The nutrient density in terms of percent DCP and TDN of the diet of complete feed mixture were also improved. It was observed to increase (P<0.05) milk production of buffaloes with the feeding of complete feed mixture (Wheat straw, 3.7 kg; Concentrate mixture, 3.6 kg; Cotton seed cake, 0.8 kg and Maize fodder, 3.9 kg) with lowered cost of production. Therefore, it may be concluded that feeding of balanced complete feed mixture with available feed ingredients could improve the milk production, thereby; farmers may get more return from buffalo rearing.