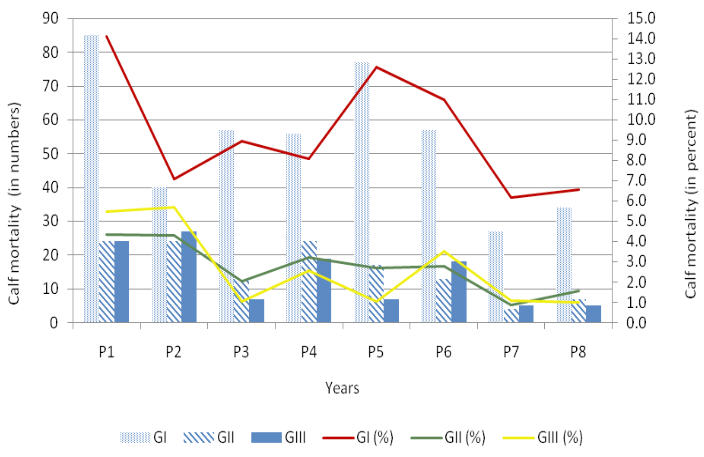 The Present study was conducted to retrospectively analyze the pattern of calf mortality (0 to 1 year age) from 1992 to 1993 to 2015 to 2016 in an organized Murrah buffalo herd maintained at Central Institute for Research on Buffaloes (CIRB), Hisar, Haryana. During the study period, highest calf mortality (8.35%) was observed inperiod P1 (1992 to 1995), while lowest mortality (2.64%) was observed in P7 (2010 to 2013) with an overall mortality rate of 4.94% from1992 1993 to 2015 to 2016 over the period of twenty five years.The overallage-specific mortality (9.5%) was observed highest in Group I: birth to three months age,while lowest mortality (2.5%) was observed in Group 3: 6 to 12 months age. There was no significant difference in overall sex-specific mortality (P≤0.01) over the period of twenty four years. Highest proportionate mortality rate (37.6%) was observed during winter season and greatest losses in terms of proportionate mortality rate (30.7%) were attributed to gastrointestinal plus pneumonia causes of mortality. Chi square test depicted statistically significant association of period, age group, season and cause of deathwith the calf mortality at P≤0.01. Retrospective investigation indicates that overall calf mortality rate from birth to one year of age was much lesser during the recent period (P7: 2.6%, P8: 3.1%) possibly attributed to good husbandry conditions including routine vaccination schedule, optimum colostrum feeding and improved nutritional management as contributing factors here for a steady improvement in the management and health status of calves through time. Based on findings of the highest mortality up to 3 months age (9.5%) in the present study, proper hygienic conditions in calf sheds, adequate healthcare, appropriate colostrum feeding and good husbandry conditions during this critical period are recommended to minimise the calf exposure to new infections.