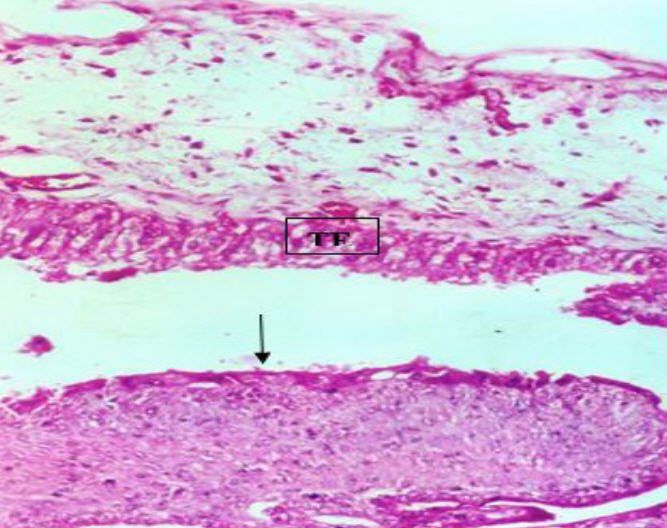 The present study was conducted on placentomes of 20 buffaloes (n=20) ranging from 38 to 243 days of gestation. Their gestational age was determined by measuring the curved crown rump length (CRL) of foetii using an inelastic thread as per formula given by Soliman (1975) in bovines. Depending on the CRL and estimated age of the foetuses, the samples were divided into 3 groups. The placental tissues fixed in 10% NBF were processed and stained accordingly. The present observation revealed that the cryptal epithelium was cuboidal during early and mid pregnancy but transformed to squamous during late pregnancy especially at the tip of the maternal septa. This reduction in size and nature of epithelium during late pregnancy was in order to shorten the distance between foetal and maternal tissue for substance exchange by diffusion. The trophoblastic epithelium transformed from cuboidal during early and mid pregnancy to stratified epithelium in the arcade region due to accumulation of binucleated giant cells that were involved in phagocytosis of extravasated erythrocytes in the arcade region. The phagocytosis released iron from the RBC that were probably being utilized by the developing fetus as very strong reaction for acid phosphatase was observed in the arcade region and iron in the form of fine granules were observed by special staining.