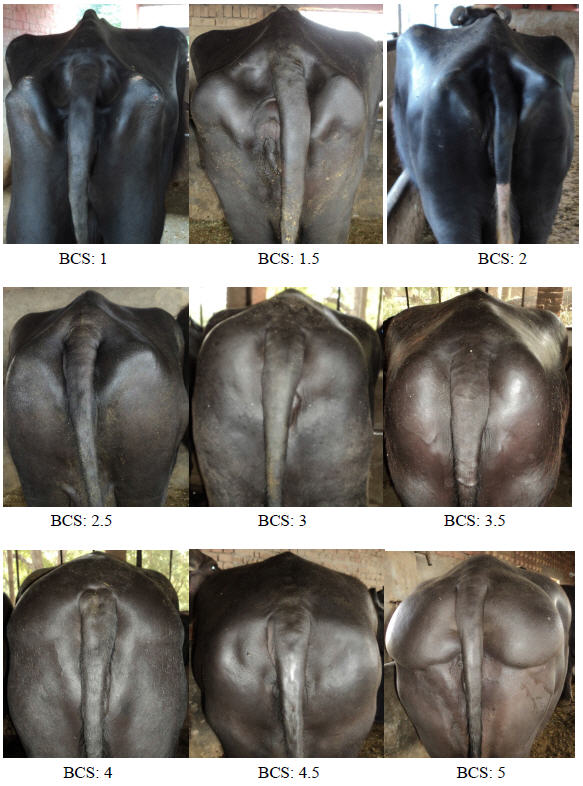 The effect of transition on body condition score (BCS) and ultrasonographic back fat thickness (USG BFT) was examined in 101 multiparous buffaloes grouped according to transition stage i.e., Far off dry (FOD), Close up dry (CUD) and Fresh (F). With BCS 2 to 2.5, the BFT of F period was significantly lower than FOD period. With BCS 3 to 3.5 and 4 to 4.5, the mean BFT at F period was significantly reduced as compared to FOD and CUD periods. Buffaloes with BCS 5, showed a significant reduction in BFT from FOD to CUD and from CUD to F period. BCS 5 at FOD period was characterized by accumulation of ‘fat Pads’ around the buttock. Majority of buffaloes with BCS of 4 to 5 showed reduction in BCS at F period. The overall correlation coefficient between BCS and USG BFT was 82, 83 and 78% for FOD, CUD and F period respectively. The overall correlation coefficient between visual BCS and BCS assessed from digital images for FOD, CUD and F period was 99, 98 and 95% respectively. It was concluded that digital images can be readily used to estimate BCS in buffaloes and USG BFT gives an accurate measure of fat reserves in buffaloes.